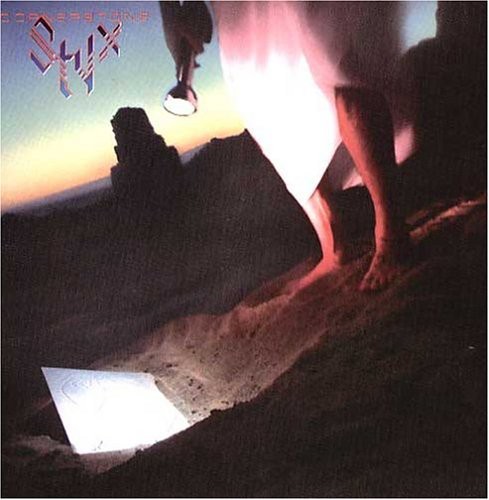 This 1979 LP rocketed to #2 on the strength of the hits Why Me and Borrowed Time and especially Babe, the #1 smash ballad that became the band's biggest hit of all time. Warm keyboards and lush harmonies rule the roost here.

''Cornerstone'' was Styx's follow-up to their second consecutive Top 10 selling Triple Platinum album in a row, 1978's ''Pieces of Eight''.

Like the four previous Styx albums, the band produced the album themselves once again. However, the band started using a new recording studio Pumpkin Studios in Oak Lawn, Illinois. Plus, the album was the first where the band shied away from the art-rock/prog-rock influences that dominated their first eight studio albums and was the band's first move towards a more pop/rock direction (band member Dennis DeYoung stated in a 2009 interview that the change in direction came from reading bad reviews the group got in the rock press whilst on their first tour of England).

Dennis DeYoung had two ballads on the album. The first was the album's first single and Styx's only US #1 single "Babe" which Dennis wrote for his wife Suzanne. The track was performed and recorded as a demo with just him and the Panozzo brothers but then James Young and Tommy Shaw heard the track and decided to put it on Cornerstone with Shaw overdubbing a guitar solo in the song's middle section. Another ballad was the power ballad "First Time" which was intended to be Cornerstone's second single (radio stations were playing it and got such a response that A&M wanted it out) until Shaw complained and threatened to leave the band. "Borrowed Time" was released instead, reaching a disappointing #63 on the charts. DeYoung also wrote the Top 30 hit, the poppish "Why Me", which was the third single release from the album. Dennis pre-dominantly used a Fender Rhodes electric piano on over half of the tracks. Also, the group used real horns and strings on the album on several tracks.

DeYoung and Shaw co-wrote two tracks. The opening "Lights" was music by DeYoung and Shaw with lyrics by Shaw (who also sang the track). The rocking "Borrowed Time" had music by DeYoung (intro) and Shaw with lyrics from DeYoung (who sang this track). "Borrowed Time" would open concerts on the group's tour in support of Cornerstone nicknamed The Grand Decathlon tour.

Shaw's famous song on the album was the folkish sounding Boat on the River which became the band's biggest European hit. He also penned the pop-rocker "Never Say Never" and the epic proggish closer "Love in the Midnight," which has been sampled to create the hip-hop song "The Streets Been Good to Me" by the artist Maino, on the album "Death before Dishonor".

JY contributed the rocker "Eddie", which was about Edward Kennedy pleading with him not to make a US run for President.

Cornerstone became Styx's first US Top 5 album peaking at #2 on the Billboard album chart and is currently sitting at Double Platinum according to the R.I.A.A. although A&M said it went Triple Platinum (3 million copies sold in the US). - Wikipedia